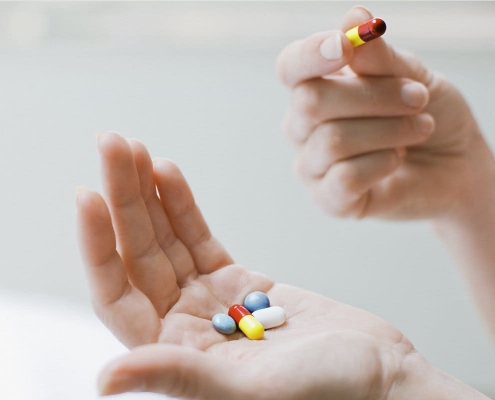 If you start taking a new drug, be sure to talk to your doctor about possible side effects such as weight gain.

For anyone who has watched a drug advertisement, it's no surprise that many medications have a long list of side effects, some of which may cause you to want to give up their full intake. One of the common risks in these lists is weight gain. Although this effect is not dangerous in itself, depending on your health goals, a larger number of scales can be uncomfortable. That's why it's important to be prepared, understand why weight gain can happen and be sure it's not an issue to deal with. In fact, there may be other options available as well.

Whenever you start a new drug, ask your pharmacist for basic information, including what factors the drug is used for and if weight gain is likely and you're not bothered by it, ask your doctor if you can take a smaller dose or there are other options, surely, you still want to have healthy eating and exercise habits (or start if you're not already normal).

Whether you're using a drug to treat anxiety or depression, a steroid to relieve osteoarthritis pain or an antihistamine to control odor and sneezing allergies, here's how they affect your weight.

Medications include Amitriptyline (Elavil), Duxepine (Silenor), Nortriptyline (Pamelor). These drugs may increase appetite to stimulate weight gain."" If you are using antidepressants, do not stop taking them abruptly. First, share with your doctor and come up with a plan that best supports your mental health, Harvard Women's Health Organization memo. If weight gain stops taking your medication anymore, you can talk to your doctor about changing another group of antidepressants. "Bopropion (Wellbutrin XL or SR) or Duloxetine (Cymbalta) are more associated with weight loss, while fluoxetine (Prozac) is neutral in terms of weight."

Oral corticosteroids such as prednisone (brand names such as Rayos, Deltasone and Prednicot) treat different types of asthma and osteoarthritis to back pain and lupus. "These have many side effects, one of which has changed appetite, fluid retention and metabolism," he explains. Pharmacists recommend taking corticosteroids along with food, and a healthy, balanced snack such as almonds or a yogurt dish is recommended. Oral steroids are usually recommended for a short period of time (e.g., a week or two of dosage), which limits side effects. If they should be consumed long-term, weight control may be more difficult, and you should be more diligent with diet and exercise.

If you have allergies or itch rashes, you may have consumed antihistamines. Studies have shown that people who regularly use antihistamine drugs have more body weight and waist circumference than those who do not." Past research in the Journal of Obesity has shown that this is associated with H1 receptor antihistamines Zyrtec, Faxofenadiene (Allegra) and Desloratadiene (Clarinex). Histamine in the body shuts down hunger signals." In contrast, antihistamines may somehow interfere with the signals being full. One option is nasal steroid sprays such as flonase. These are different from oral steroids and are generally not associated with weight gain.

Medications that treat seizures, including gabapentin (Gralise), pregabalin (Lyrica) and vigabatrin (Sabril) can increase your appetite. Excess calories caused by consuming more food can eventually lead to weight gain. "If you are ill and are taking one of these medications, it is important to know that weight gain may be the result. If you feel that this drug is not right for you, talk to your doctor about turning to epileptic drugs that are associated with weight loss or are weight neutral. "Research Felbatrol, Topamax or Lamictal.

Beta blockers are commonly used to treat high blood pressure. Some of them are likely to cause weight gain, including atenolol (tenormine) and metoprolol (le pressor), the reason for the scale is unclear, but beta blockers can make you tired and special as you start taking medication. These drugs slow your heart rate and can reduce exercise tolerance." Fatigue and discomfort during activity make you stay more sedentary, which causes weight gain. A study published in the Journal of Gastroenterology in May 2017 found that the drug may also reduce metabolism. For this reason, researchers suggest that overweight or obese people should not prescribe blockers as first-line treatment. Instead, ACE inhibitors may be a better option, but talk to your doctor.

SSRIs are selective serotonin re-uptake inhibitors, a type of antidepressant that increases levels of the serotonin neurotransmitter in the brain. For example, Lexapro, Paxil, Zoloft. These may cause weight gain by affecting your appetite. Also, by reducing symptoms of mood disorders, it may affect eating or exercise habits, if you gain weight, talk to your doctor. Weight gain usually happens early and this suggests it can become a problem for a long time. "

MAOI stands for Monoamine Oxidase Inhibitor and treats depression by preventing a brain enzyme that breaks down mood-balancing neurotransmitters such as serotonin and dopamine. It may also be used to alleviate migraine symptoms. It may also stimulate appetite, noting that phenolsine (nardale) causes the greatest weight gain in these medications. If this is a worrying issue for you, ask your doctor if there are other options.

If you are taking insulin to treat diabetes, know that it may cause weight gain. That is, because this hormone helps your body absorb glucose from the bloodstream. "Glucose is a good thing – your body's cells use it to work effectively," says Mitchell Howard, D-Farm, clinical assistant professor at the School of Pharmacy and Pharmaceutical Sciences at The University of Toledo in Ohio. That said, if sugar is absorbed from the bloodstream and driven into cells, and no longer used by the body for energy, it will turn into fat. If you overeat, especially high-sugar foods (candy, dessert), your weight increases, he says. If you have type 1 diabetes, you should take insulin. If you have type 2 diabetes, changing your lifestyle will help improve insulin function and you may be able to use diet and exercise to reduce (or ultimately remove) your insulin dose, Dr. Howard says.

Another common class of diabetes drugs, sulfonylurea, reduces blood sugar by 20%, but also causes weight gain of approximately four to five pounds, sulfonylurea contains glycolazid (diamikerone) and glibenclamide (glynaz). These drugs stimulate pancreatic beta cells to release insulin. "More insulin in your bloodstream pushes sugar into your cells," Howard says. In the end, they cause weight gain in the same way as injectable insulin. There are diabetes medications including metformin inhibitors or SGLT2 that cause weight loss or are weight neutral, Howard says. He adds that the type of medication that is best for you depends on your medical history, current health status and cost considerations.

These drugs can be used to treat schizophrenia and bipolar disorder. Howard says one of them is particularly – Olanzapine (Zyprexa) is associated with the highest weight gain potential compared to other anti-psychotic drugs. In addition, these types of drugs impair glucose function and increase cholesterol and triglycerides, putting patients at risk of developing metabolic syndrome. Howard says Lorasidon (Latuda) and Ziprazidone (Geodon), two other anti-psychotic drugs, are less likely to gain weight.

Want to join the discussion?
Feel free to contribute!

۵ Mistakes When Vegetarian Does vitamin D reduce the risk of corona?
Scroll to top